13. You are standing at the centre of a circular field of radius R. The field has a low wire fence around it. Attached to the wire fence (and restricted to running around the perimeter) is a large, sharp-fanged, hungry dog. You can run at speed v, while the dog can run four times as fast. What is your running strategy to escape the field?

I really like this one, at first I thought it wasn't possible, we'll go through one of the ways that doesn't work...

Consider the diagram below: 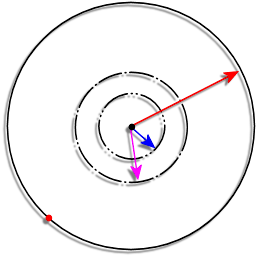 Firstly I, like everyone else thought that the most likely technique would be to stand in the middle and run away from the dog. This would leave you running a distance R and the dog running πR this would take you a time R/v and him πR/(4v) so clearly he would get there before you as:

So clearly we need to be closer to the edge than just in the middle, let us work out how far away from the centre we have to be in order that we have the advantage over the dog. Let our distance from the centre be xR where x is a number less than one eg. if R were 10m and we were 1.5m from the centre then x=0.15 Assuming that we can get the dog on the opposite side of the circle to us (I'll come back to that,) then the distance we must run is (1 - x)R where as the dog must always run πR we can equate the time associated with these distances, remembering the dog runs at 4v.

The strategy is to run in a circle of 0.2146R < radius < 0.25R until the dog is on the opposite side then make for the fence like the clappers.

It seems possible that there are other solutions. Such as a spiral giving an angular component to your velocity. This would not work if your direction of travel was always away from the dog, (as in Θdog + π,) which was my first thought because at some point all your velocity would be angular. We could assume the dog would always move so as it would always run to try to match Θhuman. This seems solvable. You would need to consider that your radial velocity would be less than V because there is a tangental component. You could model with different angular velocities.

I've seen this written with a duck on a round lake, surrounded by a forest. At the edge of the lake is some kind of monster that can't swim. I suppose that makes sense as to why the monster can't get on the lake. But can't ducks fly?