Answer to puzzle #21: The Brick, The Boat and The Lake

21. A man is in a rowing boat floating on a lake, in the boat he has a brick. He throws the brick over the side of the boat so as it lands in the water. The brick sinks quickly. The question is, as a result of this does the water level in the lake go up or down?

This used to be used as a question at the Oxbridge university interviews for science candidates to gauge how people think. For all I know it still is... Oh sometimes people ask about throwing an anchor overboard. It's the same. 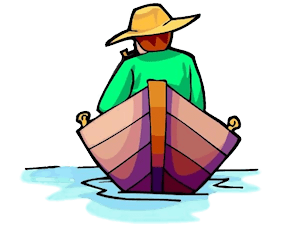 There is maybe a little physics needed here...

When an object is floating be it because it is something less dense than water, say polystyrene, or because it is in a boat, say a brick and the whole boat is less dense than water, then it displaces in the water it's own mass. For example a 10 Kg lump of lead on a boat will force the boat to sink by a volume equivalent to 10Kg of water. Hence displacing 10Kg of water. Or indeed forcing the water level to raise by an amount equivalent to 10Kg of water. (Like when you get in the bath.)

When an object sinks in water it necessarily displaces it's own volume.

So which of these is greater?

The Water Level Goes Down!!!!

If that is not clear then consider the following example: you need to know that 1 litre of water has a mass of 1Kg:-

Say the brick weighs 2Kg and is 1 litre in volume.

When the brick is in the boat it is forcing the water to be displaced by 2Kg or as we know 2ltr.

When the brick is over the side and sat on the bottom of the lake it is displacing just it's own volume or one litre.