63. Billy The Whizz, a 19th century cowboy, carries an 1847 Colt single action 6 shooter revolver. So proficient is he with this weapon that when he fires all 6 shots in a row, the time between the first bullet and the last is 60 seconds. How long would it take him to fire 3 shots?

You wont be surprised to hear the answer is not 30 seconds. Like the previous puzzle, this is one example of a whole class of puzzles of this form, no tricks, no slight of hand:

The answer is 24 seconds. What's going on, hopefully the diagram will help explain:

We can reasonably assume, since the actual firing of the bullet is almost instant the thing that actually takes the time is the cocking in between shots, there are 12 seconds between shots however much you might want it to be 10.

There are a whole bunch of these types of puzzles, they rely on the basic principle that you are given on one hand information about a sort of pinpoint event and the number of them, but on the other hand you are given a total that pertains to the spacing between events. 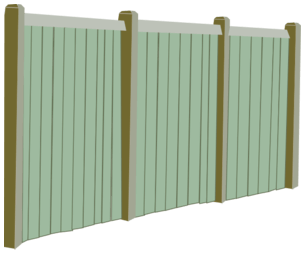 'There are 4 fence posts separated by 10m fence panels, how long is the fence?'

Is a pretty close example to the bullet question. Of course it's obvious when you are looking at a picture of the fence. Another trick these puzzles tend to use is the maths is invitingly simple to work out the wrong answer.

There are many more, lets try another:

'As a crime scene investigator you need to work out the length of someone's stride. You find 9 usable footprints in roughly a straight line. You measure the distance from the toe of the first print to the toe of the last, it's 360cm. What is the length of the his stride.'

Nine foot prints have eight spaces between them. If there were only two foot prints that would be the length of the stride.

Let's consider another, this one is quite clever because it introduces another element which could distract you.

There are 20 poles in a row. A car travels from the first pole to the 12th pole in 26.4 seconds. How much more time will it take to reach the 20th pole assuming same speed throughout?

A factory was cutting rolls of cloth into 1 metre lengths, from a 200 metre roll. How long would it take for the machine to cut the roll if each cut took 4 secs?

Like the previous puzzle I'm keen to build a list of examples of this specific type of puzzle, if you see one I'd appreciate an email or hit me up on twitter @nigelcoldwell.