29. There were two men having a meal. The first man brought 5 loaves of bread, and the second brought 3. A third man, Ali, came and joined them. They together ate the whole 8 loaves. As he left Ali gave the men 8 coins as a thank you. The first man said that he would take 5 of the coins and give his partner 3, but the second man refused and asked for the half of the sum (i.e. 4 coins) as an equal division. The first one refused.

Can you explain why this was actually fair?

This puzzle was sent to me by Tawfik Aswad who tells me it was asked of Ali-Ibn-Abi-Talib the fourth caliph of early Islam (600-661 AD.) I've rated this one green as the solution came reasonably quickly after I started thinking... 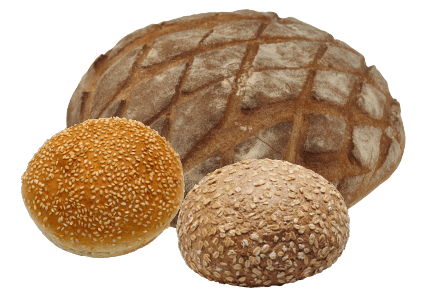 Looking at it that way misses something. The men may have actually given 5 and 3 loaves but they will also have eaten something too.

We could reasonably think that the 3 men would have shared the loaves equally eating 2 ⅔ loaves each. Meaning that the actual contributions of the ment was less:

I like the way the maths works out nicely with this puzzle.

The puzzle doesn't say explicitly that they shared the bread equally. Maybe it's implicit, maybe it's besides the point.